​Written and performed by Jake Boston

Touching, hilarious and deeply personal, Bare Knuckle sheds light on the brutal, and often hidden, male world of bare knuckle fighting. This one-man show now makes its debut in London after performing at the Edinburgh Fringe Festival 2018 and in New York City in 2019 as part of the world’s largest solo theatre festival – United Solo, to great reception by public and critics.

Bare Knuckle reveals the emotional battles between father and son. Jake Boston, the son of an Irish Traveller and champion bare knuckle fighter, explores in his latest piece the need to be the best, to keep getting up off the floor to throw another punch and his father’s desire to pass the title of champion on to him. He questions masculinity, father-son relationships, growing up as a misfit and the ongoing fight to find himself.

Written and performed by East London born and bred Jake Boston, dramaturgy and direction by Lucy Richardson, lighting and sound by Jelmer Tuinstra, music by Dale Mensah, movement by Freddie Opoku-Addaie, Bare Knuckle is a kaleidoscope of colourful characters, memories and music that brings to life a truly beautiful, gritty and uncompromisingly personal coming-of-age story.

Age restrictions: Recommended 16+ however, under 16s may attend if accompanied by an adult who is aware of content / adult language
--

Press Quotes
"Very moving and managed to evoke a time and place unfamiliar to many"
Sue Bullivant (Audience member)
"A Truly Spectacular one-man show, written and performed by an amazingly talented actor"
Demi Boezalt (Audience member)
"A very powerful and moving show that had me engaged throughout"
Reuben Christian (Audience member)
"Jake's performance covered an array of emotions which were felt in every moment"
Rebecca Chance (Audience member)
"Boston himself is a joyful stage presence with a talent for characterful storytelling"
Flora Gosling - The Wee Review
"His charismatic performance is a warm tribute to his father’s legacy"
Dana Zhang - All About Solo
Creative Team
Jake Boston Writer / Actor

Jake is an East London based playwright, actor, director and community / drama facilitator. Growing up, Jake “felt unsettled, went on a quest for answers and got involved with the wrong crowd but luckily, found theatre”.

After being involved in life threatening altercations which prompted him to leave the gang he was part of, at 15 he joined his local youth theatre group and fell into acting. Not long after, he joined Phakama and has worked with National Theatre, Oval House, Orpheus Centre and Hackney Empire to name a few. He has facilitated projects in Brazil, France and Indonesia.

Jake has acted in numerous plays and has written for theatre and film.

Jake’s latest project (and his 7th full length play) - Bare Knuckle is an auto-biographical, one-man show depicting his journey growing up as the son of an Irish Traveller, champion bare-knuckle fighter battling with alcoholism and mental stability. The show was performed at Edinburgh Festival 2018. See a review of the show at https://theweereview.com/review/bare-knuckle/

Bare Knuckle was selected for and performed at the United Solo Festival in New York in November 2019. See information at http://unitedsolo.org/us/2019-bareknuckle/ and https://allaboutsolo.com/laying-it-all-bare-an-interview-with-jake-boston/

Lucy is a director, dramaturg and educator. Her work focuses on giving a platform to those underrepresented in the theatre and in society. It spans professional theatre work and large-scale participatory projects.

Lucy has directed Stephanie Jacob’s The Strongbox, performed at VAULT Feb '18 (Origins Award-best new play winner), re-staged as the headline at The Clapham Omnibus Perception Festival in 2020. As a dramaturg she has worked with Tam Tam Theatre’s Marleen Vermuelen to make a piece about her experience with cancer. She has recently developed and directed Diverse City’s Mid Life performed at Bristol Old Vic and The Barbican London.

Other directorial work includes The Woman Who Cooked her Husband by Debbie Isitt starring Alison Steadman and Daisy Donovan, The Quick by Stephanie Jacob at the Tristan Bates Theatre and Clean Break’s Heart Speak by Zawe Ashton at The Arcola.

For Phakama she produced large scale, immersive, participatory performances in South Africa, Argentina, India, Lesotho and UK. Be Yourself at The Tricycle, was reviewed as: ‘the most exciting piece of theatre in London’.

Lucy co-wrote the book Phakama: Making Participatory Performance published by Methuen in 2017. Lucy has directed over 30 Drama Schools and Universities productions and was artistic director of Lewisham Youth Theatre for 10 years.

Freddie is a London based dance maker, performer, curator, director and educator. His work explores universal notions of the group, the individual and the outsider, and challenges what it means to be part of a diverse, contemporary urban generation today. It is informed by having been raised in two different environments, in Ghana and the multicultural, dynamic hub of East London. Freddie is interested in cultural differences beyond the obvious and how they manifest themselves as meaningful similarities and differences in human relationships. In his collaborations, he seeks the unexpected and employs task-based or gaming methodologies as the principal creative processes to arrive at live works which are deliberately unpredictable, sometimes with indeterminate outcomes and which challenge conventional norms of performance.

Freddie is an associate / programmer of Dance Umbrella.

Jelmer graduated from the Theatre School in Amsterdam with a BA Honors in Theatre making, Techniques and Theatre. He undertook an internship as a design technician with Dutch company Dogtroep. Further experience was acquired as a light designer with Theatre Company Suburbia and as sound and light designer for the opera, The Flying Dutchman.

After his BA, Jelmer attended the Master Advanced Theatre Practice - Scenography at the Central School for Speech and Drama. Since then he has worked as a light designer and scenographer for several Dutch and English theatre companies. He also works as a freelance production manager and Theatre Technical Manager for Londonmet.

Dale is a 27-year-old musician from Hackney, East London who always had a desire to affect people with his voice. Dale writes music with relatable substances to create an intimate feeling as if he is speaking directly to a listener.

Generally referring to himself as a ‘sonic sculptor’, Dale grew up in East London and his environment is an extremely important influence in his work. He says, “My art is a reflection of my reality”.

Film/Video now plays a huge role in his artmaking. In 2011 he took a giant leap into the film world, picking up and camera and teaching himself how to edit. Since then he has worked and edited with numerous companies. One of his short films achieved great success being a Vimeo© Staff Pick and along with 30 film festival screenings around the world picking up 9 awards.

Fabio acted with Bando de Teatro Olodum – Brazil and The Birds directed by Kathryn Hunter at the National Theatre. He trained as a dancer with the Joffrey Ballet School in New York and the Conservatoire of Dance in Holland, acquiring an MA in Contemporary Dance with London Contemporary Dance School (LCDS). As a dancer he performed with 4D (LCDS) and The Lion King . He trained in circus at the Circus Space in London and performed at The Millennium Dome.

You can book tickets by clicking on the link below. 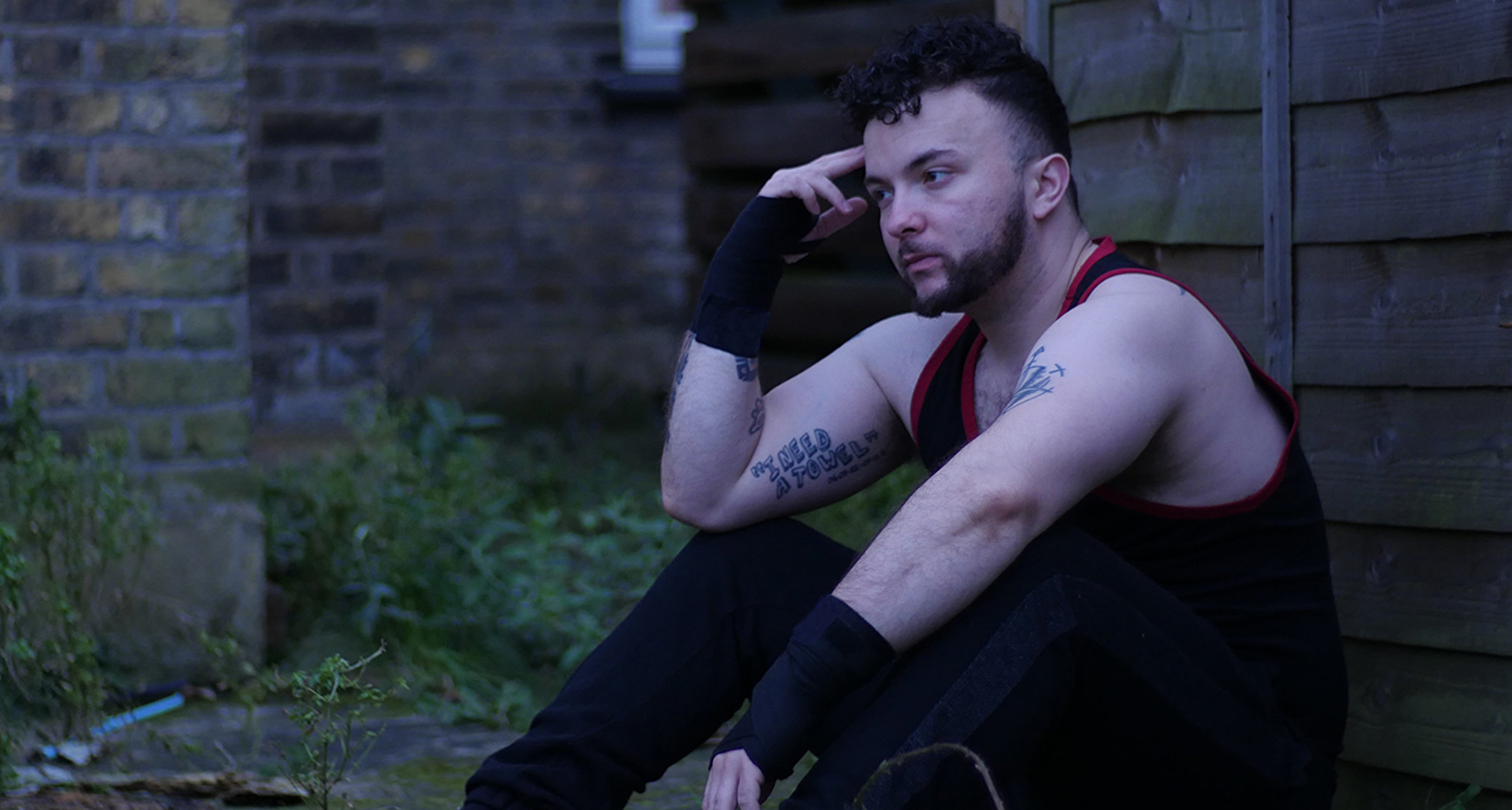